We have been trying to have a baby without success for the past 2 years. We had seen our GP in those two years and he told us to give it time, which we did (the two years). He then suggested that we do a number of tests, which we did. Our disappointment grew with every passing moment.

I started to search for different ways of trying to help ourselves to fall pregnant naturally, as I was not convinced that IVF would be an option at that stage. Then I came across the website of Darren Grech. I know about naturopathy as my mum is a naturopath but hadn’t actually thought of going that way. After waiting that long and being suggested to the option of IVF, I thought that there should actually be an alternative way that could work and I gave Darren Grech’s treatment a go. And that is all we needed to do. We were pregnant the first month since my husband and I started the treatment. 9 months later we had a beautiful healthy baby boy.

We would like to Darren for helping us to finally be parents.

We do not have enough words to express our gratitude and we couldn’t thank you enough for your hard work, professionalism, patience and courage to help your patients. It means the world to us.

I would definitely recommend Darren to all my friends and family.

God Bless the work of your hands.

I had battled with IBS for many years and been told by doctors that I would just have to live with it. After being on a holiday and having my stomach continually acting up I decided I did not want to live with it any more and decided to look for an alternative treatment. Lucky for me I came across Darren.

In just a couple of months the difference was amazing. I no longer suffered the stomach cramps and diarrhea all the time. It is wonderful to no longer have to worry where the nearest toilet is every time I go out. And now 2 years later I no longer even think of myself as an IBS sufferer.

I can’t recommend Darren enough. It certainly worked for me and has made a huge difference to my life. 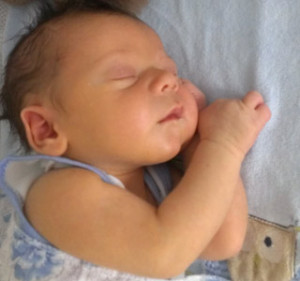 My husband and i have tried to conceive for about 2.5 years and nothing was happening. We started to see the fertility specialist and did all the tests etc.. Nothing was wrong with either of us but as we were trying to conceive for a while they suggested that we undergo IVF, which for me was a bit of a disappointment.

I started to search for different ways of trying to help ourselves to fall pregnant naturally. Then i came across the website of Darren Grech. I gave it a go and voila… I was pregnant the first month since my husband and I started the treatment. 9 month later we had a beautiful healthy baby boy.

We would like to thank you for helping us to finally be parents. It means a world to us. We cannot be more thankful, god bless him!

I am a keen cyclist and severely strained my anterior deltoids over 3 years ago. The pain was constant and made sleeping very difficult as I could not find any position which was pain free. 3 months of the most advanced Physiotherapy did not help.

I saw my Homeopath, Darren Grech about this and his medicine fixed the problem in 3 days! I thoroughly recommend his treatment. It worked quick & easy, and the only challenge was to think of Homeopathy for a sporting injury.

After having recurring severe genital warts for the last 6 years after countless creams & repeated cryosurgical removal I was fed up. My doctor said regrowth was very common and that I would have to keep getting them removed ‘as there is no cure’. I then consulted with Darren. He was able to prescribe an internal medicine which he explained would help my immune system for this condition which has been very successful. They gradually shrank over a period of 6 weeks and in the last 2 years I have not had a single wart return.

I have found my overall health has improved, including my Irritable Bowel Syndrome which I’d also say is a thing of the past. I thoroughly recommend his ability!

I tried antibiotics and Roaccutane and the side effects were worse than the acne which was so stubborn it continued to get worse. I had to stop these drugs as my regular blood tests showed dangerous liver levels. I was referred to see Darren Grech.

Darren asked me a lot of questions and then gave me a medicine which I took twice daily and in about 3 weeks the acne totally cleared up. I would recommend everyone with acne to use his treatment before they use drugs, which I now believe are much inferior and unnecessary. My dermatologist spent 5 minutes with me and it cost $400 & the drugs made me sicker. Darren was so much more thorough, it cost less & it worked brilliantly. More people really should know about this!

I was bitten by a spider and the two fang marks on my leg started spreading. They eventually joined and rapidly became a huge ulcerating mess the size of my hand! My GP was very worried about this as it was quickly spreading over my leg and prescribed me very strong antibiotics. I decided to first see my Homeopath Darren Grech before I took the antibiotics as in the past he has helped me.

He told me he has treated this quite a lot in the past and was confident he could cure it. I’m glad I did, as the ulceration began to heal quickly after I took his medicine and it completely healed in about 4 weeks. Since I have known Darren I have been able to avoid pharmaceuticals and feel great to know there is an effective alternative. I showed my GP and he was very surprised!

My heel was giving me a lot of trouble for over 6 months and was forced to limp around. I had previous steroid injections which helped a bit for a few days but the pain kept coming back. My work partner recommended I see the Homeopath Darren Grech. I went along very sceptical as I didn’t know much about this.

He prescribed me a medicine I took thrice daily and within about 5 days my heel spur pain completely stopped. He recommended I keep taking it for a few months. It’s been over a year later and it has not returned. I definitely recommend his treatment.

I will always recommend Darren Grech. He completely changed my condition I had for about 25 years. About 70% of my body was covered with scaly Psoriasis.

Every time I took off my shirt it snowed flakes! UV treatment didn’t work. I tried methotrexate & cyclosporine which did nothing and felt so ill I had to stop them. So I gave up. Then I was referred by my wife’s friend to see Darren. After 4 weeks on his medicine it virtually disappeared, I kid you not! I couldn’t believe it. My GP just shook his head and stared. The scales & itch started to slowly come back after 12 months so I saw Darren again and he prescribed the same medicine & it disappeared again quite quickly. To think I was told all those years it is incurable!

I slammed my finger in my car boot, which resulted in a deep cut on my finger, including some skin damage around the nail.  The cut healed nicely but the skin around the nail became infected. 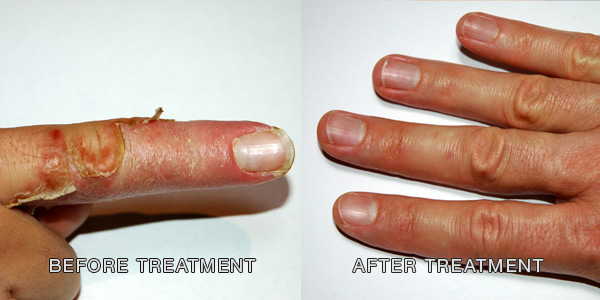 The infection spread right around the finger and all the way up to my hand, then started spreading down the next finger.  The infection consisted of blisters.  I popped some of the blisters to let the pus out, which resulted in skin becoming loose and just falling off over time.  I tried some homeopathy we had at home but without success. I was put onto Darren Grech and made my first appointment with him.

2 days before the appointment a doctor and some nurses at a function at work saw my finger – they were horrified.  They told me I could loose my hand and that I just had to take antibiotics without hesitation. I became very scared and called Darren to ask if he could bring my appointment forward because I really didn’t want to take antibiotics.

Darren moved some things around and saw me the next day.  He said, “I guarantee you we’ll fix it”.  He gave me 3 different bottles of homeopathy and said to try one first and call him 24 hours later.  I called him and told him that although the original wound was looking better, the infection was still spreading.

He told me which one to try next and to call him in another 24 hours.  I didn’t really notice any further improvement so Darren advised me to take the third one.  I had an amazing response.  By the next day the infection had stopped spreading and was starting to heal.  The whole infection dried up and started healing within days.  The photos show the healing stage.  The pus disappeared, the skin dried up and the blisters dried out and turned red before flaking off.  The skin damage completely healed after about 3 weeks.  The nurses at my work were amazed, and the doctor just said, “Well, you know we only have about 10 minutes with each patient”!

In comparison I had a long appointment with Darren, followed by a series of long phone calls, at a very reasonable cost, and I didn’t have to take any medication at all.  My 4-year old son has never had to take pharmaceutical drugs and has responded instantly to homeopathy whenever he has a problem, so I’m glad I had the same result.  Darren is now working with me on a long-term condition, along with lesser issues like hay fever, so I am very hopeful of a good result.

We recommend Darren to all our friends and family and I often speak about the huge success we’ve had with homeopathy to the medical people I come in contact with through my work.  Darren is professional, has considerable experience and clearly passionate about his work and homeopathy.  He is also very approachable, and in fact during my appointments it feels like I’m just having a chat to a friend.