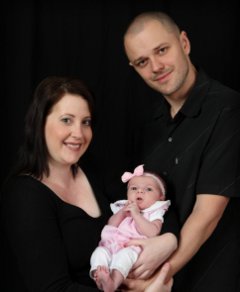 After two years of trying to conceive our first child we finally became pregnant, unfortunately I had a miscarriage. My husband and I were beginning to worry that we may have fertility issues and i wanted to try and find out if we did sooner rather then later as my biological clock was ticking. Obviously we had a few options (IVF being one of them) but i was willing to try a natural therapy first.

I found Darren’s website by chance and was reading the testimonials and i thought i have nothing to loose and everything to gain so i made an appointment. We had our consultation with Darren and he made me up a Herbal & Homeopathic treatment plan which i began taking. The following month i noticed a significant difference with my cycle. I was convinced that the treatment was taking effect. The next month which was only 6 weeks after seeing Darren I was pregnant.

I couldn’t believe it we were so excited but didn’t want to get our hopes up because of our loss last time. In September this year (2012) we had a beautiful, healthy baby girl named Amber. I honestly believe that it was due to Darren’s treatment plan that this miracle finally happened. I would highly recommend Herbal & Homeopathic treatment to anyone who is having fertility issues.